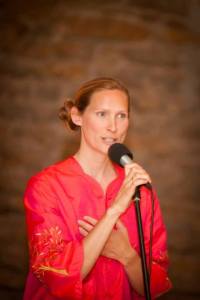 Lottie Child is an artist and educator from Dorking in Surrey.  She is fascinated by the ways joy and playfulness can shape our lives and our world. By learning from and alongside children she seeks to highlight and intervene in structures of power so as to explore possibilities for different ways of sensing, moving and living.

Lottie spent 10 years researching how behaviour shapes place, using a practice she developed called Street Training. She launched Street Training by walking through the streets of Camberwell in South London for 24 hours asking everyone she met how to be safe and how to be joyful on the streets resulting in the production of  ‘Street Training Manuals’. She addressed these themes through participatory live art acts and strategies of collaboration often with children and in the process employed a variety of means, including performance, cartography, photography, video, writing, teaching, workshops and events. She developed a three year project enabling children and young people in Camberwell to train police to tell the difference between playing out and antisocial behaviour. Key to her work is the relationship of the individual to the collective.

Street Training explored how we can use our thoughts and behaviour to shape our streets, towns and cities and her new collaborative school, Wooden House, does it with education. At the heart of Wooden house is trust , in the innate intelligence and strength of children. Inspired by the schools of Reggio Emilia in Italy, Wooden House sees children as threshold thinkers, who are highly motivated to research and hypothesise on how the world works and ask life’s big questions. She sees this as  both a school and an art work in the lineage of the situationist practices and of Josef Beuys’ social sculpture.

Lottie’s collaborative ventures have included a number concerned with artistic, cultural and educational experimentation, notably The University of Openness, set up in 2003 as a self-institution for independent research and learning. Through the Faculty of Physical Education, Lottie aimed to put the body at the centre of learning and created a Climbing Club that involved regular group explorations of the City of London. Participants investigated multiple ways of engaging with and learning about the built environment by creatively interacting with each other and the architectures of the City, using its spaces playfully. Traditional learning hierarchies are often challenged or reversed through working with local collaborators, including children and young people.

Lottie taught at the University of the Arts for eleven years and has exhibited and worked in numerous locations, both nationally and internationally. Among her exhibitions, events and residences have been those at Tate Britain, the ICA, South London Gallery, Arnolfini in Bristol, Pinakothek der Moderne Munich, Ars Electronica in Linz, Arts Transponder Berlin, and Kiasma Helsinki. She has been interviewed on BBC radio Four and was awarded a residency in Brazil funded by the British Council 2008-9 for which she produced the Rio Street Training Manual. In 2010 she worked with teachers and schools in collaboration at the Venice Architecture Biennale with the architecture firm muf. She has also worked extensively in East and South London, for example producing a Street Training Manual as part of Camberwell Arts Week in 2007. Lottie holds the Forest School Level 3 qualification and has been running ‘Family Forest School’ for two years. Recently has she completed a year-and-a-half consulting as a Forest School leader and Artist to Little Barn Owls Day Nursery and Farm School, in Horsham. Little Barn Owls is inspired by the enquiry based learning of Reggio Emilia, and was awarded “Nursery of The Year 2015” by Nursery World Magazine.